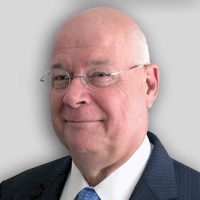 Mr. Mattice is the Founder and President of the National Economic Security Alliance (NESA) a nonpartisan IRS designated 501(c)(3) nonprofit. The NESA ‘s primary mission is to educate policy makers at the federal, state and local level as well as business leaders and the general public on issues impacting the economic security of the country. The NESA established the William H. Webster Profiles in Leadership to recognize government leaders who have a significant impact on the economic security of the country. The NESA also has a research arm which produces briefings and whitepapers.

Prior to forming the NESA, he had an exceptionally strong corporate track record serving for over 35 years as a senior executive for three major U.S. based global corporations, (Northrop, Whirlpool and Boston Scientific) and one mid-cap company (Wescom, Inc.) all of which are in dramatically different business sectors. His corporate experience-base traverses the defense & intelligence, electronics, life sciences, consumer products and service industries. He is the recipient of numerous awards and honors from both the government and private sector for his work and contributions.

Mr. Mattice is considered one of the top experts in the fields of corporate security, enterprise risk management, business intelligence programs, information asset protection (including intellectual property, trade secrets, brand protection & anti-counterfeiting), cyber, and management systems. He is a Distinguished Fellow at the Ponemon Institute; a Senior Fellow Emeritus at Auburn University’s Center for Cyber and Homeland Security; and is Chairman Emeritus of the National Intellectual Property Law Institute’s Board of Directors where he was instrumental in the development of the Economic Espionage Act and National Trade Secrets Act which were both passed unanimously in the House and Senate.

He served as a member of the Inaugural Advisory Board for the National Counterintelligence Center (which is now known as the National Counterintelligence and Security Center) and served on the National Industrial Security Program Presidential Task Force established under President George H.W. Bush, the task force’s members included the Secretary of Defense, the Secretary of Energy and the Director of the CIA and key industry representatives. He also served as a member of the Department of State’s Overseas Security Advisory Council, where he remains a Senior Advisory. Additionally, he was one of the founders and member of the Inaugural Board of Directors for the International NGO Safety & Security Association. He also served for several years on the Steering Committee for the Global Congress on Combating Counterfeiting and Piracy, which was established jointly by the Secretary Generals of INTERPOL and the World Customs Organization.

He served three terms on the Board of Directors for the International Security Management Association, where he remains a life member, and spent several years as a member of ASIS-International’s Standards and Guidelines Commission. He has authored numerous articles and contributed to a number of books. He is board certified in risk and information systems controls (CRISC) and has been recognized as an expert witness at both the state and federal level.

Mr. Mattice served on the Advisory Board for the Graduate and Undergraduate level Leadership and Management Program in Security (LaMPS) at Michigan State University in East Lansing, Michigan. His education in business disciplines has been enhanced through executive development programs from The Center for Creative Leadership, University of Michigan’s School of Business, Harvard Business School and Harvard’s John F. Kennedy School of Government. The focus of his undergraduate work was at California State University – Long Beach in Security Administration.